Donald Kapres, Jr was known as “Donnie.” He was the 64-year-old son of a beloved Pittsburgh Police Sergeant, a devoted husband who cared for his terminally ill wife, an amazing Dad to one daughter, two stepdaughters, and a grandfather of nine and full-time raising two. He was an avid Pittsburgh Steeler fan, a gunsmith by trade, and a hunter and fisherman who genuinely lived off the land to feed his family. Donnie was a man that wouldn’t hesitate to give you the shirt off his back if you needed it.

On March 11, 2021, he was a house fire victim. He suffered cardiac arrest, was resuscitated and was left with an anoxic brain injury and a vegetative state. He saved his wife and grandsons then Donnie went back into the house to see where the fire started to try and stop it, as he had no insurance. Donnie and his family lost everything and had no home to return to.

For 18 months, Donnie fought for his life, and he was a  warrior beyond words. He defied the odds by not only surviving but continued to show his will to live. He is off permanent dialysis, opening his eyes, and doing little things that doctors said he would never do.

Donnie’s journey was long and arduous. He is fighting to wean off a ventilator. And he has other conditions such as bed wounds and setbacks with infections and pneumonia.

As you can imagine, his medical bills are excessive, and his recovery is long. Donnie’s grandchildren, who he was raising, need our help. Donnie sacrificed and gave so much for so many. Please consider giving 4 QUARTERS ($1), so they can keep going forward with their lives. Coming together and sharing a 4 Quarter$ At a Time contribution will help support Donnie’s grandkids, who he loved so much.

Thank You All in advance for your generosity!

Jackie Kapres is Donnie’s sister and a long-time member and sponsor of the NFL Alumni Georgia Chapter. 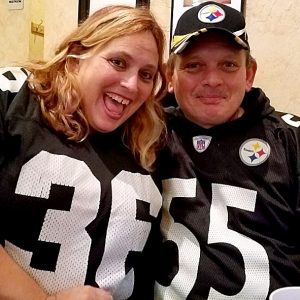 You can donate $1.00 or More. Just fill in the amount you would like to donate. You can make your donation reoccurring – monthly.